What the heck, that ceiling? Ceiling, better known as the ceiling, is part of a building construction that functions as a layer that limits the height of a room. In addition, the ceiling is also useful for security, comfort, and the beauty of a room

Basically, the ceiling is made with the intention of preventing hot or cold weather from entering the house directly after passing through the roof. Currently, the ceiling is not only a barrier to heat or cold, but also as a decoration to beautify the interior of a building.

The ceiling materials used also vary, ranging from PVC ceiling, wood, melamine plywood, asbestos cement sheet, hardboard, softboard, acoustic tile, particle board, aluminum, and the most popular is gypsum ceiling. The easy maintenance factor is the reason why gypsum ceilings are a favorite of many people. If you are interested in using gypsum ceilings, first know the benefits, advantages and disadvantages of gypsum ceilings, 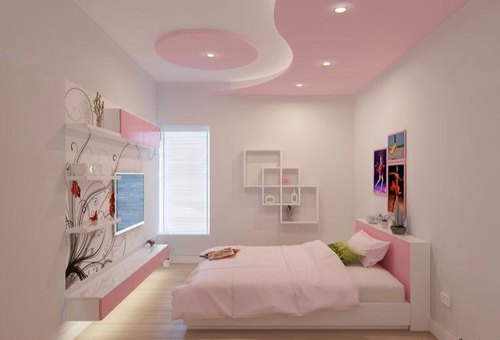 You need to know, gypsum is not only useful for the ceiling. At least, there are six benefits of gypsum for development affairs, namely:

In its use, gypsum ceilings have several advantages that you can consider. Some of them are:

The reason is, gypsum ceilings have very many variations, especially for accessories in the corners, middle, and trim. Gypsum also has different colors and sizes, this can make it easier to choose a gypsum ceiling that is suitable for your needs.

Gypsum available in the market is generally in the form of sheets with a size of 120 cm x 240 cm. However, there are also manufacturers that produce special sizes with thickness levels varying from 9 mm to 15 mm with an ideal thickness of 9 mm. The process of choosing a gypsum ceiling also requires you to be more careful. It is highly recommended to ask an expert in the field of gypsum ceilings before installing it.

Currently, modern homes generally install a ceiling made of gypsum board. This is because the aesthetic value produced is very good, the ceiling looks neat, even and smooth like there is no connection at all. Gypsum is also very easy to form into various types of ceilings, from conventional to cathedral forms. In addition, gypsum ceilings can be a good indicator of whether your roof is leaking or not.

If you are currently in a hurry to build a new house in a short time, choosing to use gypsum ceilings is highly recommended. The reason is, compared to other types of ceilings, gypsum ceilings work faster.

Gypsum is not resistant to water

Compared to other types of ceilings, this gypsum ceiling is very vulnerable to water. If water seepage from the roof hits the ceiling, it can not only leave spots on the gypsum surface, but can also destroy the ceiling. If the gypsum ceiling that is destroyed is not small, then it is possible for the ceiling to collapse.

Installation of the wrong Gypsum ceiling

This type of gypsum ceiling material is very appropriate to be installed in houses where the roof covering is a concrete slab because there is a guarantee that it will not leak. In addition to using screws, installation can be done using gypsum powder or compound. This powder functions as glue in place of connection or lists and ornaments. Installation of gypsum joints is usually done by plastering first. Well, if the installation process is not correct, for example the connection is not right, it can make your house’s gypsum ceiling collapse.

There are several tricks for the correct gypsum ceiling installation process:

First: when installing the gypsum screw must be driven to the right depth to achieve maximum durability. The reason is, if pushed too far, the binder will actually penetrate the gypsum and make its durability decrease.

Second: there must be sufficient fasteners, i.e. properly spaced, this serves to hold up the ceiling.

In addition to being impervious to water, gypsum ceilings are also prone to impact. The brittle structure of gypsum makes it impervious to hard impacts. That’s why you have to keep your gypsum ceiling safe from collisions, for example when you clean the ceiling.

Builders who are not experts in installation

Not everyone can install or assemble gypsum ceilings. It is better for you to use the services of an expert in the field of gypsum ceiling installation and assembly to install it. If it is installed by just anyone, it is not impossible that the gypsum ceiling instead of protecting it will harm the occupants of the house.

Installed in the wrong area

It is not recommended to install gypsum ceilings in bathrooms, exteriors, or parts of the house where the humidity is high. It is not impossible that the gypsum ceiling will collapse in a short time because of its fragility due to high humidity. For areas that have high enough humidity, you can install a gypsum ceiling that is waterproof or has a higher moisture resistance

Ceiling support is not strong

Make sure to install a gypsum ceiling, first install a strong support or support because this material is prone to cracking. If the supports are not strong, the gypsum ceiling is likely to collapse, even when there are no leaks in the roof. Another drawback of gypsum ceilings is that they are not soundproof. If you have the intention of making a studio at home, then installing a gypsum ceiling is not a suitable choice.

Don’t be discouraged when you see the drawbacks. For those of you who want to install a gypsum ceiling, here are several techniques or methods that can be applied easily to avoid leakage or damage.

The first step is to ensure that the roof construction above it does not leak. Before installing the gypsum ceiling, you can check by flushing the roof with water. With this step it can be determined whether the roof is leaking or not.

You can also choose to use gypsum from the waterproof type. This type of gypsum contains a protective layer so that water cannot penetrate. But of course, the price of this gypsum is more expensive than ordinary gypsum.

You can apply this type of gypsum to rooms and places that have a higher risk of roof and wall leaks. For example, the bathroom or toilet. Another tip in using gypsum for the ceiling is not to use gypsum on the ceiling in the exterior area of ​​the terrace

Come on! Take a peek at 8 Decorative Plant Display Designs on the Wall